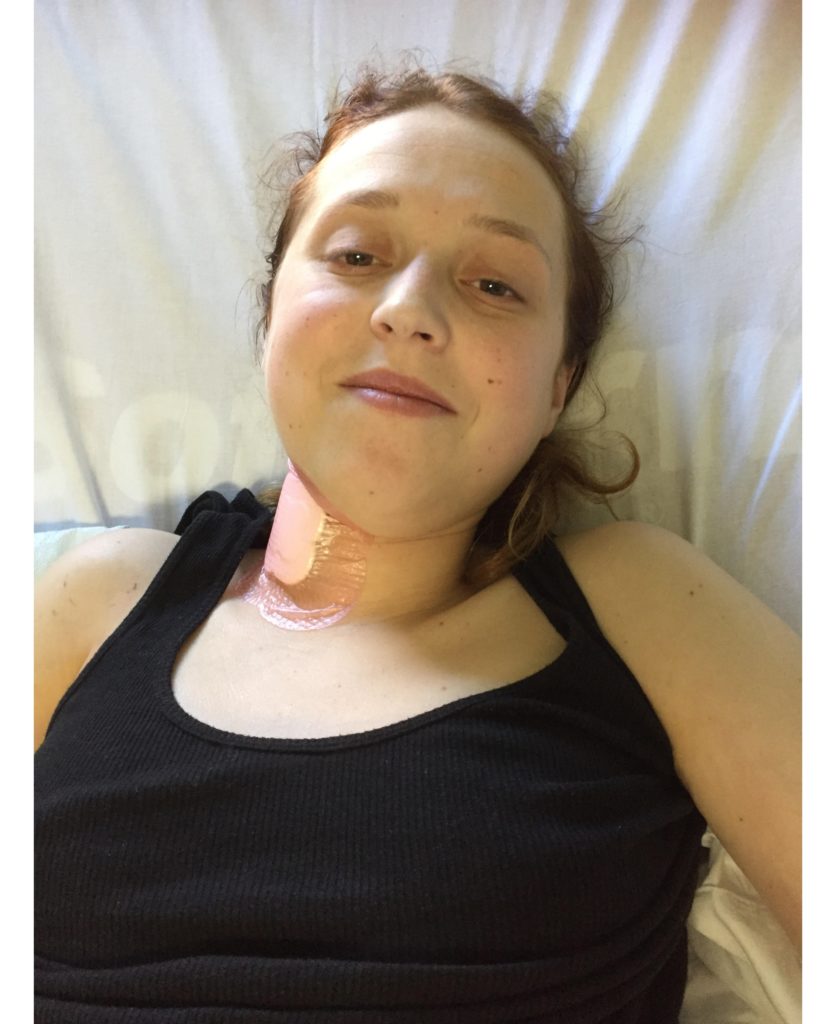 As a very young child I was quite well but, at the age of eight, I had to start going to Birmingham Children’s Hospital to have scans and checks on my liver.

By the time I was 14 I was told I would need to be listed for a transplant.  This was extremely scary; listening to all the facts was daunting.  I started on NG feeding; as my weight stabilised I became a little better so was moved on to the inactive list.

When I was 17, things started to get a lot worse: my eyes filled with blood so there was no white showing, I began vomiting blood, and things got really scary.  My body filled with fluid and I went from a size 8 to a size 20 which, aged 17, was horrible; I was constantly asked if I was pregnant.  I couldn’t do the things normal teenagers did which made life pretty naff, not only for me but for my family.

At one point, due to the toxins building up in my body, I lost a period of 24 hours.  My mum took me to hospital and they assumed I had been taking drugs!  From then on, it was back and forth between Nottingham and Birmingham Hospitals, where they put drains in to get rid of the fluid.  At this point I was as yellow as a Simpson and twice the size I’d ever been; I felt awful.  I told my grandma that I’d never get a boyfriend as nobody would want someone like this with all my issues.

One day – after they had drained 13 litres of fluid in the morning and seven that night – I was moved to the super urgent list, which meant the next compatible liver would be mine.  I got the call while I was in hospital.

I received a split liver; the other part went to a six-month old little boy, which meant that my donor saved at least two lives (possibly more).  My surgeon told me that if I hadn’t got the transplant I wouldn’t have been here the following week.

After three weeks in hospital I was allowed home.  It was a long recovery but I was able to start looking forward to my future life.  Due to the fluid, my lungs had been compressed and I had some chest issues.  I needed regular IV antibiotics and they trained mum so that we could do this at home.

I began having more of a normal life, returning to work and doing some of the things a teenager is meant to do, like going out.  Coincidentally, when I went out for my 19th birthday I met my boyfriend who, from then on, became a huge part of my life!

Later on, the IVs became more regular.  Every two months I’d spend at least three weeks on IVs; my chest wasn’t getting better.  Transplant was mentioned but I felt I wasn’t ready.  I soon became too ill to walk upstairs or do anything without help.

I went to hospital. A nurse saw me struggle through the door.  I was grey and put straight on to oxygen.  After starting IVs, the doctor came and asked me how I wanted to die!  I told them not to be stupid; they had to get me on the transplant list!

It took six months to get me listed, but I was determined to get as fit as I could, going to the gym and swimming.  I pushed myself, as I knew it would benefit me in the long run, although it often left me in bed for most of the following day.  I was fed up with being unable to work or do much, so I joined the CF Trust as a volunteer.  I wasn’t as worried about this transplant; I saw it as my chance to live and do everything I wanted to do.

The first call came and I was a mix of emotions – but it wasn’t a match.  The fifth call was – after almost three years on the waiting list and four false alarms.  As we arrived at the theatre door the coordinator told me to bid farewell to everyone.  I had never been put to sleep on my own before so I felt scared; I didn’t want to say goodbye so I said “See you later”.

The next thing I remember is seeing my family in ICU. I was desperate to get moving and use the new lungs; it was uncomfortable with drains and lines.  I was home after 17 days and from then on I’ve got better and better.  My lung function keeps going up and, after three months, I was allowed to start back properly exercising.  Nine months later, I’m running 3K for the amazing hospital that saved my life.  Not only that, I’ve signed up to do the Transplant Games next year.

I know how lucky I am to have had my life saved twice by organ donation.  I have the chance to live and do things I’ve wanted to do but never been able to.  The best bit is spending more time with my family, boyfriend and friends.

I’ve lost too many friends while they have been waiting for transplant and this needs to change – so please think about it and sign up.  After all, you no longer need your organs when you die, but you can give someone else a new life.  I plan to persevere with making my donors – my heroes – proud.