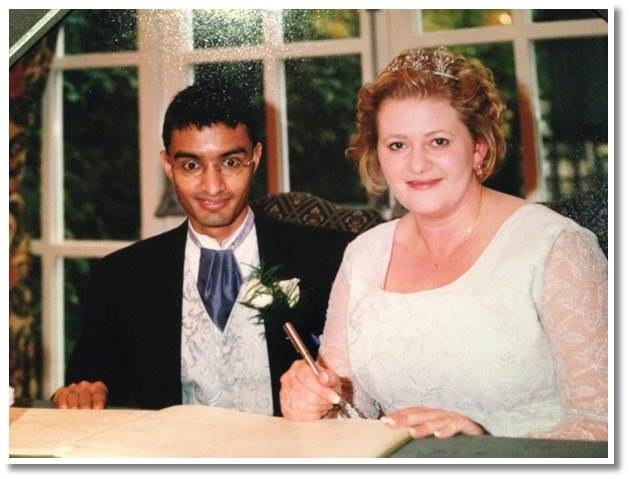 It was Sharon’s gift, not mine, to donate her organs and turn an end into a beginning for others.

My name is Mahmud.   I married Sharon in October 2002 and we lived in Leeds.  We were young, starting a life together.  We had sold our house in Yeadon, north of Leeds, and were living with Sharon’s mother in Bradford for a couple of weeks before our new house was ready.  Once we had moved, we had planned to start a family.  Life was good.  I was 33, Sharon just 32.

As usual, the alarm went off at 5.45 am for Sharon to get up for work. She always went to the bathroom first.  Ten minutes later I heard a little thud but as our dog, Angel, didn’t make a noise I didn’t think anything of it.  At 6.00 am, when she hadn’t come out of the bathroom, I knocked on the door; there was no answer.  I went in – luckily it wasn’t locked.

What I found shocked me.  The shower curtain around the bath had been pulled down and Sharon was lying in the bath.  She had been using the shower, but she’d collapsed, pulling the curtain with her.  My immediate thought: she had fainted.  I shouted to her mum and we called 999.  The ambulance operator talked me through mouth-to-mouth resuscitation – but without any joy.

The ambulance arrived really quickly.  For the first time ever our dog didn’t bark at strangers as they came in and tried to resuscitate Sharon.  I hurriedly packed her some clothes as the ambulance team told me we had to go to hospital – she wouldn’t have liked to have awoken in a hospital without any.

At Bradford Royal Infirmary A&E the doctors worked frantically as I sat in the waiting room.  Then they came out and told me that there was little more they could do – and had I considered organ donation?  I was devastated and felt so alone. I’d never really experienced death before.  The sister on duty and A&E came and put an arm around me.

Of course the answer to the question about organ donation was yes.  Ever since I had known her, Sharon was passionate about organ donation.  She carried a donor card, but she never pushed anyone to carry one.  I am sad to say that I hadn’t registered at that point.

Because I had said yes when asked, I got introduced to Sean, the transplant coordinator.  Sean explained that Sharon would be moved to Intensive Care to warm up her body for the transplant operation.  That afternoon, Sharon took one breath unaided.  It gave a lot of false hope as it turned out, but I spent a night in the hospital.  The staff in Intensive Care were amazing – they showed such care for her and, indeed, for me.

The next day, the doctors did the brain stem test to confirm that Sharon had indeed died.  As I learned much later, it was the most severe type of brain haemorrhage – like someone just turning the lights out.  As ways to die, it was painless and she was with her family –it was just 50 years too early.

Sean, the transplant coordinator, was amazing.  He looked after me through the whole process.  It took me a few attempts to walk away from Sharon for the last time on Tuesday, 16th March, before she went in for her transplant operation.  Sean stayed with Sharon throughout the operation, which was a big comfort to me.

The next day, the visit to Sharon in the morgue was difficult.  When I came out, I received a call from Sean.  Sharon’s organ transplantation had been successful.  However, her lungs and her heart could not be used because of the damage from the brain haemorrhage; but her kidneys and her liver (split into two) saved four people, including a little boy of eighteen months who wouldn’t have made his second birthday without Sharon’s liver.  That, above all, made me cry tears of joy – she loved children and she would have been proud of that.

Since Sharon’s death, I have registered to be a donor; shamefully it has taken this to make me realise how important it is.  And I have done what I can to create awareness of organ donation.

WHAT HAVE I LEARNED THROUGH THIS?

Sharon made it easy for me.  She saved me from making that difficult decision on whether to donate her organs because she had told me her wishes.  This is the most important thing – to tell your loved ones in order to remove that stress from them if that awful time comes.  I knew what she wanted. Don’t put your loved ones through that stress by not letting them know your wishes.  If you’ve registered to be a donor, tell them!  I genuinely don’t know what I would have said if I hadn’t known her wishes.

To this day, I still am astounded by the level of care and professionalism she was shown by the nurses.  I remember being forced to eat something that night in Intensive Care, and when I returned to Sharon I saw one of the nurses brush her hair.  That little moment of dignity meant so much.  And when I walked away for the last time, I am told they were in tears too.  It just didn’t occur to me that our wonderful nursing staff would be so caught by the emotion too – they cared, and for that I am forever humbled.

Remember the sister in A&E who put an arm around me?  It transpired that she herself had lost her husband young because there was no organ donor available for him.  How incredibly difficult my situation must have been for her, and how professional she was to handle it the way she did.

Finally, it was Sharon’s gift, not mine, to donate her organs and turn an end into a beginning for others.  My memorial to her is to spread the word about organ donation and share my story and try and encourage everyone to register and tell their loved ones of their wishes.  If just one more person becomes a donor, it’s worth it.