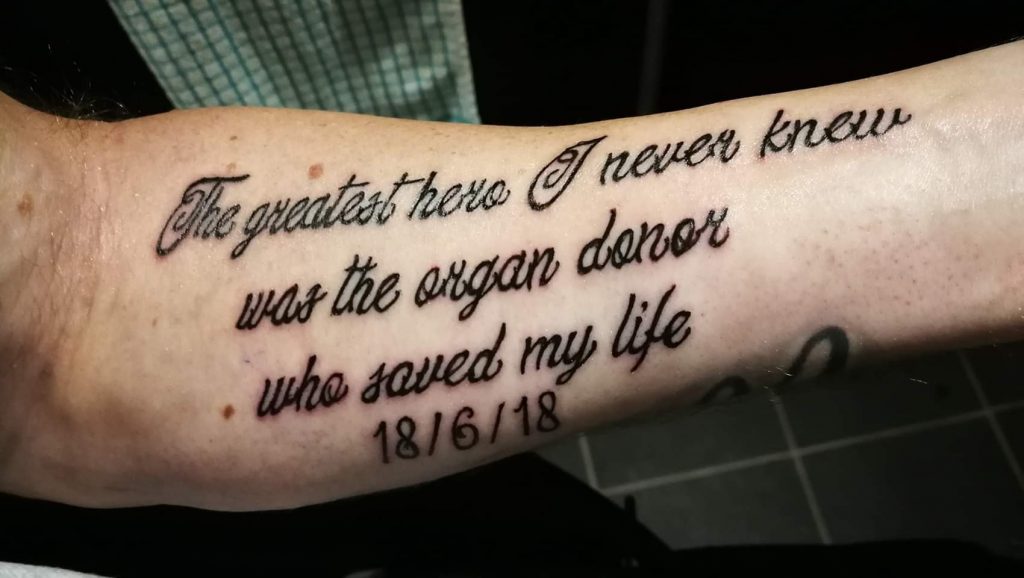 By this time my bowel had gangrene and the surgeon at the time expected me to die in the next few hours, so he pushed the intestines back inside my body, including the infected bowel. Despite their expectations of my imminent death, I survived and then the surgeons had to then try to rectify this mistake and remove the affected bowel!

I was born in 1984, with a very severe case of Gastroschisis. This is a condition where the bowel was outside my abdomen at birth, but my case was more severe as I also didn’t have an abdominal wall at all (literally a great big hole & all my intestines were on the outside). I was an unexpected case of this and back then it wasn’t heard of much at all.
The hospital where I was born transferred me to a main hospital, but due to multiple errors and lack of communication at the time, it was over 48 hours before I was in the operating theatre after birth to try and do something to help me survive.

By this time my bowel had gangrene and the surgeon at the time expected me to die in the next few hours, so he pushed the intestines back inside my body, including the infected bowel. Despite their expectations of my imminent death, I survived and then the surgeons had to then try to rectify this mistake and remove the affected bowel! There were many issues over the next 18 months due to my bowel not rejoining, my abdomen not able to be closed, etc. By the time I was 1 year old, I had undergone over 30 major abdominal operations to remove & repair damaged bowel over & over again.

This left me with Short Bowel Syndrome, a condition where you don’t have enough functioning intestine to absorb esufficient nutrients naturally to survive. This also can and does go hand in hand with various deficiencies of vitamins, calcium, iron and others. The main deficiency I suffered from was iron deficiency anaemia, to the point I was needing iron infusions and blood transfusions every few weeks.

I was fed enterally for most of my childhood. This was done via tube directly into my stomach and l was fed with specially formulated, easily absorbable pre-digested liquid food. This went on until my bowel would no longer tolerate this feed. Also during all this I had multiple additional operations due to blood circulatory issues with my bowel and the recurrence of ulcers and narrowings that kept coming back at surgical joins where intestines had been joined over the years. I was eventually moved over to intravenous feeding but this was also complicated by my lack of IV access, which was very limited at the time as most of my access had been compromised by previous IV lines and procedures over many years.

In 2017 it got to the point I was on my penultimate remaining point of IV access left in my entire body, and for this reason long term IV feeding wasn’t a possibility for much longer. So I was referred to the Churchill Hospital for assessment for a small intestine and abdominal wall transplant. I would need the abdominal wall as without this part of the transplant, they wouldn’t be able to close my abdomen post op. After a long period of assessments and jumping through many hoops, I was finally listed for transplant in Jan 2018.

In June of that year the call came. I went to Oxford and did receive my transplant at the first call. I was incredibly lucky to be given this opportunity. Going into this operation, I had one central line already in place, but that couldn’t be used for transplant due to my longer term needs and they didn’t want to compromise that access, so the vascular surgeon had literally the only remaining point of access available for him to try and access to get me through the transplant. He did manage to do this, but not before discovering I had developed massive blood clot in my superior vena cava (SVC). This is the main vein that returns deoxygenated blood back to the heart. This nearly stopped the transplant there & then.

Fortunately for me, the team decided to risk it and carry on with the procedure. It’s a good job they did, because when they opened up and were preparing my intestine for removal, the found that where I had a narrowing (which was known about, but not how severe), that part of my intestine was completely closed off. It had already turned necrotic (dead). I was told after transplant, had I not had that transplant at that time, I had maximum 1to 2 weeks left to live! I was completely unaware of this situation.

After 14 hours in surgery, I was taken to the ICU. Unfortunately for me, I had issues with the blood supply to the transplanted abdominal wall so was again taken back to theatre again to reinstate blood supply to save the graft. After 4 days in ICU I was moved out of ICU and back into the transplant ward. Things progressed rapidly with my recovery and I was discharged just 18 days post transplant. But then my abdominal wall decided to start to break down, this required many more months and a few more operations and procedures to save it. including vacuum therapy and skin grafts from my leg to finally get it to heal.

Nearly 3 years post op now, I am again having issues with my iron levels & maintaining my red blood cells. I’m also struggling a lot with the symptoms of the SVC clot. These symptoms include cramps and spasms and very severe breathlessness which is very restrictive for me. But I try to make the best I can of what cards I have been dealt in life.

In my specific case, the SVC clot cannot be treated, stented or removed due to the fact I have no remaining IV access to provide support to get me through such an operation. I also can’t have a bypass because I don’t have another vein with enough blood flow from which to create a bypass. So for me, in that respect, my situation is terminal, the only thing they can’t tell me is how long I have, as no-one knows.

Should my current IV access become compromised or infected and need to be removed, I won’t be able to have it removed as the blood clot has grown around the catheter of the line. Moving this line will dislodge the clot, something that will instantly kill me. In relation to the iron deficiency and blood requirements, I have done some investigations with the help of family, and have found out why and what’s causing it and actually what has been the cause of all my problems.

When my abdominal wall broke down post transplant, I was tested for a rare condition called XIAP. at the time all I was told was that this condition affects the healing abilities in the body. Having done some further digging, I have found out it’s a genetic condition that only affects males, as it’s an X chromosome disorder passed on by the mother. This condition causes gastro issues and the body’s ability to make blood cells and retain iron. It can also destroy red blood cells. It’s based within the bone marrow. There is a cure for this, a bone marrow transplant. But given my vascular access and SVC clot situation and the fact that I’m a solid organ transplant recipient already, this isn’t an option for me.

This condition (XIAP) is extremely rare and to this date, there’s only about 150 cases documented worldwide. It normally is a terminal condition and boys with this condition aren’t known to live beyond 10 years old. Yet here I am, 37 in May of this year, having gone through all I have, still here and still fighting today. This wouldn’t be possible without the amazing donor and their equally amazing family for agreeing to organ donation which gave me the chance to carry on living and fighting. I am eternally grateful to them. Also a huge thanks to the team of specialists who performed my transplant and the wonderful ward staff who looked after me so well post transplant.

My amazing wife Lisa, who despite her own very complex and debilitating illnesses, was and is still by my side through it all. For me now, life is full of unknowns, but I’m still here, trying as hard as I can to honour my donor and do all I can to make the most of the opportunity I was given and look after the organs so generously gifted to me.

This last year has been difficult for us all, but life is for living and I intend to get back to what my body will allow as soon as we’re able to start getting back to normality.