Recollections of the first successful Heart/Lung Transplant in the UK 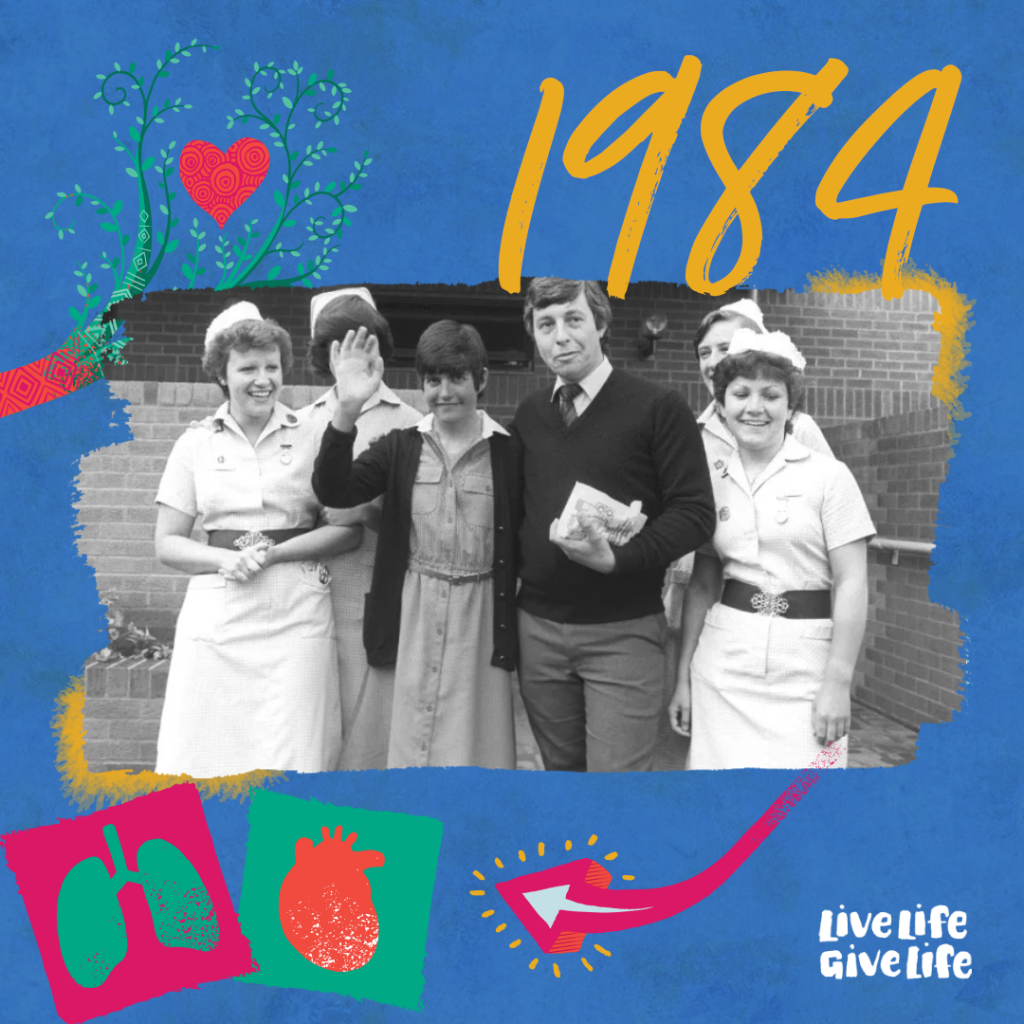 In 1984 Brenda Barber became the first successful heart/lung transplant performed at Papworth Hospital. I can still remember that night for several reasons, the main reason was not that this was another pioneering procedure, but…

I first became involved in transplantation in 1979 (41 years ago) as sister- in- charge of Intensive Care at Papworth Hospital, Cambridge. The first UK heart transplant programme had started at the hospital only months before my arrival, and I was responsible for caring for the newly transplanted patients.

These were exciting and challenging times in the early days of heart transplantation. Patients stayed in the ICU for weeks, until they were self-caring and only moved to the ward just before discharge home. Anyone entering the cubicle (known as the ‘bubble’) had to wear full PPE. Acute rejection happened too often, however with the advent of Cyclosporin in 1982/1983, survival rates started to improve. This drug also opened up the way to embark on heart and lung transplantation.

Professor John Wallwork, who had been performing this operation in Stanford, USA, came to Papworth to assist in setting up the Heart and Lung programme with the Director, Sir Terence English.

In 1984 Brenda Barber became the first successful heart/lung transplant performed at Papworth Hospital. I can still remember that night for several reasons, the main reason was not that this was another pioneering procedure, but for the first time the Donor had been transferred many miles to our ICU, in order to reduce the ischaemic time (the time from removal of the Donors organs, to implant and re perfusion in the recipient) I remember caring for this young, healthy looking lad who had had a spontaneous brain haemorrhage resulting in brain death. His family visited once briefly, to say their goodbyes, and then he was alone waiting to go to theatre. I remember thinking how amazing that this family allowed their son to be transferred to another part of the country to facilitate this new procedure and hopefully a good outcome for the recipient. I also remember thinking that it was good for us nurses to experience the sadness of the Donor side, as normally we only ever saw the happy recipient side. I remember encouraging the nurses to continue talking to him and telling him when we were turning him and giving care. Although we knew he was brain dead, and could no longer hear, I think it helped us nurses to chat to him, as this was something we knew how to do!

On the same day, Brenda was also transferred to our ICU from a hospital in London (I think it was the National Heart Hospital), where she was being looked after by Margaret Turner-Warwick. Many years later, I remember MTW presenting her patient at the Conference of the 30th Anniversary of Papworth’s Transplant Programme. She commented on when she first visited Brenda post op in the ICU, how amazed she was to see how good her colour was, and to see she was walking around her cubicle with no oxygen attached!

Both our patients were transferred to the operating theatres around the same time, and there were staff everywhere in both theatres, no room for anyone not required! It was certainly a sombre night in the ICU, thinking primarily about the young Donor, but caring for the other patients who were oblivious to the ground breaking surgery happening just down the corridor!

I remember allocating my senior staff nurse, Gail Game, to prepare the cubicle in readiness for Brenda’s return! Gail had done this many times before however, we both remember double and triple checking everything!

When Brenda finally returned to the ICU, early morning, she was ventilated and already her colour was so much better. I remember thinking it would be different, however it was remarkably similar to the heart transplants we were so experienced in looking after. Same incision, same drips, and machines. I remember the medics wanted to extubate as soon as the blood gases and bleeding were stable, and wondering whether the new lungs would breathe on their own! The main difference on return was that she required more blood gas tests to check the oxygen levels and had four chest drains instead of two.

Brenda had a very straight forward recovery, resulting in many years of good quality life. That day/night at Papworth 36 years ago, really epitomized the whole transplant journey, often depicted with the rainbow, which requires the both the rain (Donor) side and the sun (recipient) side. I was very privileged to be part of the team which facilitated major life and death decisions and being actively involved with patients and their families. Transplantation continues to be challenging and there are new developments all the time. I never cease to be amazed by the miracle of the Gift of Life.