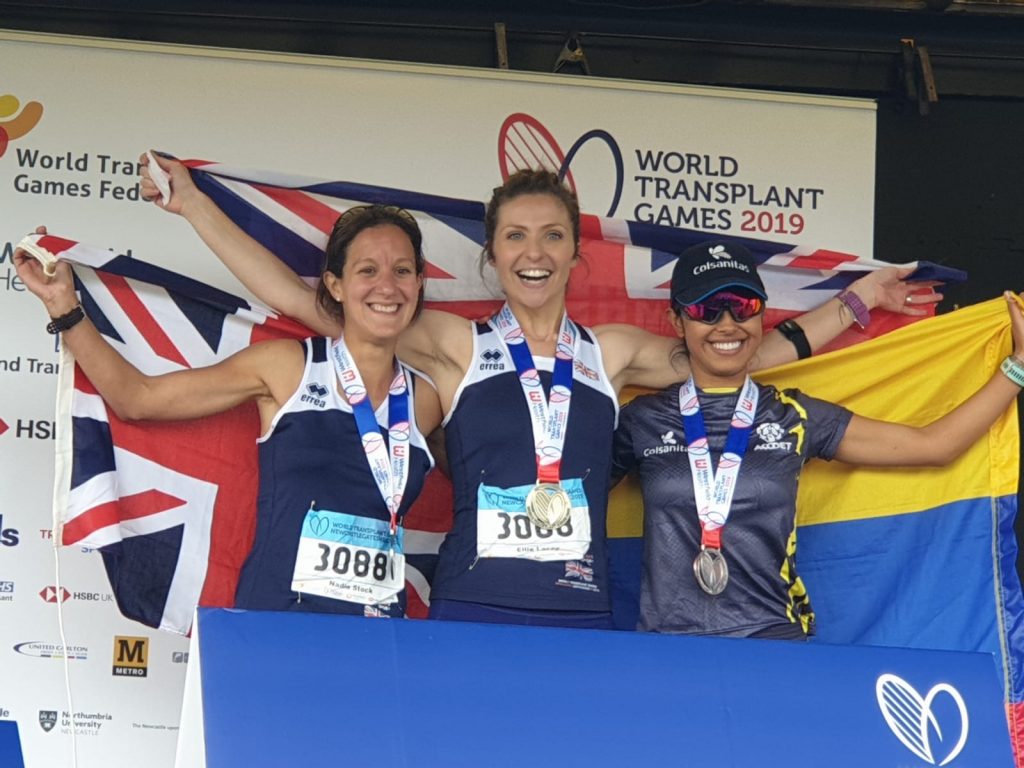 I had a couple of rounds of treatment in hospital to try and make my marrow start working properly whilst the search continued, but my body still couldn’t produce the cells I needed. The search then went worldwide and, luckily, after a few months’ wait two potential stem cell donors were found – one in the USA and one in Germany…

In 2002, whilst a second-year medical student at Newcastle Uni, I began feeling very tired. One weekend whilst training with the Scottish Mountain Rescue team I collapsed trying to walk up a hill. I wondered if my childhood asthma had come back and tried using a friend’s inhaler (definitely not advisable!).

I made it back to Newcastle and saw my GP, who arranged for blood tests. By that point I had started to notice some awful bruising as well.

It took a few days for the GPs to contact me with my results but then I was sent straight to a haematologist; at that point I had my first bone marrow biopsy. I was diagnosed with severe Aplastic Anaemia – or bone marrow failure – which meant I needed to start receiving blood and platelet transfusions straight away. Aplastic Anaemia means that your body doesn’t produce the blood cells you need – haemoglobin to take oxygen round the body, white cells to fight infections and platelets to help blood clot. All of mine were very low so I spent many weeks having multiple transfusions. I also tried to avoid any places where I might pick up an infection.

As treatment continued and it became increasingly likely that I’d need to have a stem cell transplant, my siblings were checked to see if they were matches (there is a 25% chance of a sibling being a match), but sadly neither was.

After a few months of transfusions, and Christmas spent in a hospital ward, the hospital contacted the Anthony Nolan Trust, but a preliminary search indicated that there weren’t any matches for me in the UK. I had a couple of rounds of treatment in hospital to try and make my marrow start working properly whilst the search continued, but my body still couldn’t produce the cells I needed. The search then went worldwide and, luckily, after a few months’ wait two potential stem cell donors were found – one in the USA and one in Germany.

The doctors chose the American donor as the best possible match and, in August 2003, I had the bone marrow transplant. The transplant involved being in an isolation room in hospital and having chemotherapy to wipe out my own immune system completely, before giving me back the new cells from my donor along with a cocktail of drugs to stop me rejecting them and to try to prevent me getting any sorts of infections whilst my immune system was so suppressed.

I was lucky. Other than nausea and vomiting I had relatively few side effects and was only in my isolation room for just over six weeks post-transplant. I recovered well and returned to my university studies within a year. A few years later I finally completed my degree and started work.

I have always been active and keen on sports. Whilst I was in isolation I tried to stay as fit as possible. The physios used to bring me bits of exercise equipment for me to try out on days when I wasn’t feeling too sick or tired. Post-transplant I was back running (slowly!) within a few months and, within a few years, had completed both the Great North Run and the London Marathon to raise money for blood-related charities. I have also since competed at several British Transplant Games and a World Transplant Games; those were some of the most moving and uplifting experiences of my life. The Transplant community is incredible!

A few years after my transplant I tried to get in touch with my donor by sending a letter via the Anthony Nolan Trust, but I never heard back. I didn’t really think much more of it at the time. On the 10th anniversary of my transplant, I wrote her another letter; I told her that she shouldn’t feel any obligation to respond, but that I was still alive and doing well, all thanks to her. Amazingly, this time she replied. She told me she hadn’t replied sooner as she had been worried that I might feel indebted to her. We started emailing back and forth. Then, in 2015, she came to London as part of a business trip her husband was taking so I was fortunate enough to meet her. We got on so well and we even look quite similar, which is weird!

I’m Jewish, so I do feel really lucky to have found a donor – it’s much harder, generally speaking, for people with minority heritage to find a match. And I’m luckier still to have had so few problems with long-term side effects.

If you aren’t already on one of the UK bone marrow registers I would really urge you to sign up. The Anthony Nolan Trust, DKMS and BBMR will all be included in any searches for a patient who desperately needs a transplant, so joining any of them could help save a life.