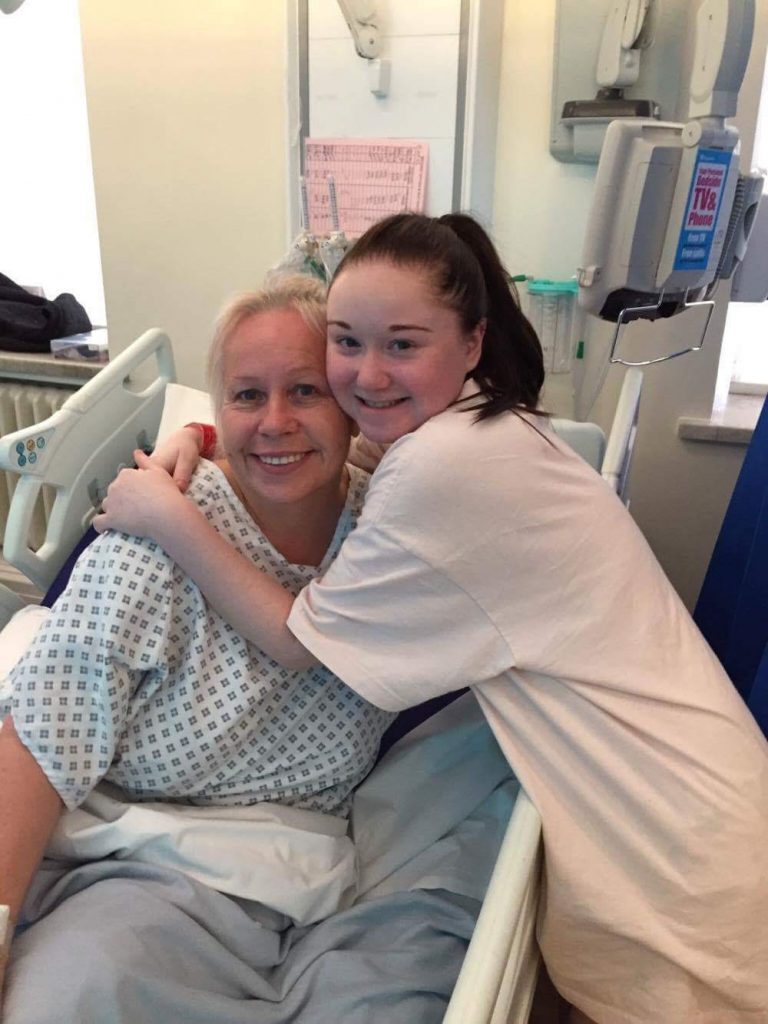 Every single day I think of my special hero in the sky and her family – and, of course, my boyfriend’s wonderful mum. What they both did is the most courageous thing anyone could ever do. My heart aches for my lung donor’s loved ones. There are no words to express the gratitude I feel

I was diagnosed with Cystic Fibrosis (a genetic life-threatening lung condition which also affects the digestive system and most other organs) at eight months old after my mum had taken me to the GP with repeated chest infections.  They kept giving me antibiotics but her motherly instincts kicked in and she knew something was seriously wrong.  Eventually I was taken to Guy’s Hospital A&E; where I ended up on a life support machine in intensive care for six weeks.  That’s when they did a sweat test and diagnosed me with CF.  The doctor told my parents I wouldn’t make it, but I came off the machine two days later when I started to breathe on my own.  I was transferred to Lewisham Hospital where I spent the next six months.  A feeding tube was fitted in my stomach to help me gain weight as I had what they call ‘failure to thrive’.  I still have the tube to this day.

By 2008, aged 16, my lung function was 12% and I was on 24/7 oxygen and using a wheelchair to get around.  My mum had to help me do absolutely everything; it was such an effort to even brush my teeth, to shower and to even eat.  I was getting so breathless by doing the most basic human tasks.  It literally felt like torture; I was slowly suffocating.

I got my call at exactly 4.07 am on 28th August 2008.  I had my double lung transplant at Great Ormond Street Hospital.  It was the most emotional moment of our lives for both my family and myself.  I had accepted I was going to die at 16 years old and I had even planned my own funeral.  I have always been close to my parents and my sister but this has made us even closer.

After the first week in hospital after receiving my new lungs, I managed to climb two flights of stairs and my lung function went up to 75% – the highest it had EVER been!

After I got my new lungs, I unfortunately got PTLD (Post Transplant Lymphoproliferative Disease) in my bowel – it’s a type of cancer.  Every month between September 2008 and March 2009 I was admitted to hospital for two to three weeks with severe stomach aches and sickness.  The doctors didn’t know what was wrong until the March, when I was rushed to hospital by ambulance with excruciating pains in my stomach – my bowel had perforated.  I woke up with an ileostomy which was reversed after four months, but that was easily one of the worst periods of my life.  I was treated with an IV drug called Rituximab, which is a monoclonal antibody.  Luckily I have been in remission ever since!

In 2013, I began feeling very poorly again.  I was constantly tired and was sleeping pretty much all day every day.  I was looking forward to my first holiday with my boyfriend of over six years (my first holiday in ten years!) – we were going to the Dominican Republic.  Unfortunately, a week before we were due to fly out, I was told I was in chronic kidney failure and wouldn’t survive if I went ahead with our holiday.  I was absolutely gutted.  Over the following months I was admitted into Guy’s and had an operation for an AV fistula to begin dialysis.

I was on dialysis for a year when my boyfriend’s amazing mum offered to be a live donor to give me one of her kidneys.  On 27th January 2016 I received the gift of life for the second time with my new kidney.

The months since my kidney transplant have been the hardest and scariest of my life, ending up in ITU at Harefield Hospital with organised pneumonia, pseudomonas and respiratory failure.  I was put into a medically induced coma, was on a life support machine and was fitted with a tracheostomy.  My mum and boyfriend were told I wouldn’t make it – but, again, I managed to fight through it!  Luckily, I am now on the long road to recovery and my kidney is working perfectly.  I have so much in my life to look forward to; I can’t wait to see what the future holds!

Every single day I think of my special hero in the sky and her family – and, of course, my boyfriend’s wonderful mum.  What they both did is the most courageous thing anyone could ever do.  My heart aches for my lung donor’s loved ones.  There are no words to express the gratitude I feel; there are simply not enough ‘thank yous’ in the world.  Without that family, I wouldn’t be here today.  I wish my donor’s family all the peace and happiness possible.  I may not ever have the most perfect health, but I am blessed with the most beautiful people in my life and I couldn’t be happier about that.