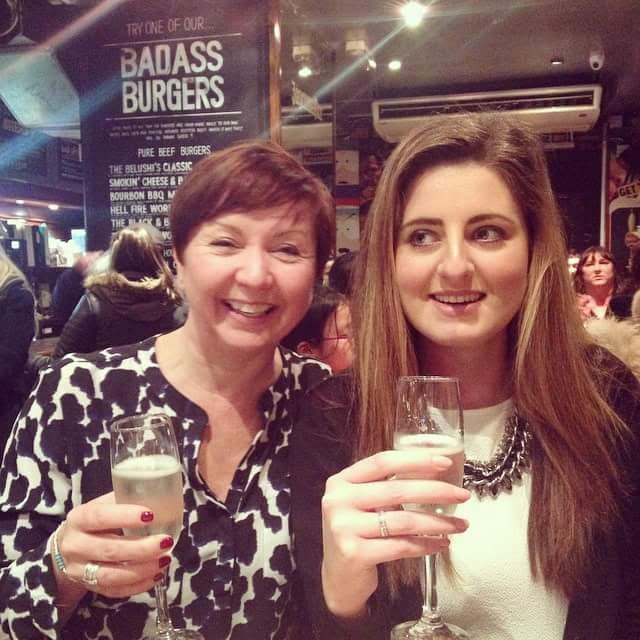 I received a thank you card from the recipient, Soraya, via the transplant coordinator. I responded and asked her if she would mind sending me wee updates on how she was doing; she agreed. We became Facebook friends and arranged to meet in London.

I originally went through the test process for my father-in-law, Cliffie.  He was on dialysis and had very little energy.  I wasn’t a perfect match so they gave us options of going through the pairing scheme, transplant list or reducing immune system to zero where I could still donate direct but with much higher risks to Cliffie.  I was more than happy to go ahead.  We were warned that pairings didn’t always happen straight away but we got a match the first time the list ran after our details were added.My recovery time was seven weeks.  The first three weeks were quite sore, but after that recovery was good and I haven’t had any problems.

A year after surgery I ran two half-marathons.  Being a donor doesn’t stop you doing anything!

I received a thank you card from the recipient, Soraya, via the transplant coordinator.  I responded and asked her if she would mind sending me wee updates on how she was doing; she agreed.  We became Facebook friends and arranged to meet in London in January 2015.  Our mums and my daughter came along too which was lovely and a bit emotional.  We’ve now met a few times and Soraya has stayed with us for a weekend.It has been amazing to see the difference the transplant has made to Soraya; she has truly blossomed.  She has a new job, partner and is soon going to be a mum to twins.Everyone says I’m selfless and have done an amazing life-saving thing, but I honestly don’t see it that way.  I’m more impressed with the way Soraya has grabbed life with both hands!  I simply did something that someone needed to do.

After years of suffering terrible headaches, repeat UTIs and feeling constantly tired, I was finally diagnosed with kidney disease, aged 20.  This was a scary prospect – was I going to die?  Would I stick out in the crowd because my kidneys were failing?  But it was also a relief to understand why I had felt so unwell for so long.  I was at University at the time studying for a Psychology & Counselling BSc.  As my health deteriorated it became a struggle keeping up with the demands of the course, both mentally and physically.  I suffered exhaustion no matter how long I slept and my appetite decreased.  However, I was able to work part-time and completed the course, graduating with a 2:1 BSc, which was a big accomplishment for me.

As my kidney function deteriorated it was time to consider transplantation and, with my dad being a match, I received his kidney in July 2010, aged 22.  It was a tense, emotional day for my family with two of us being in theatre undergoing major surgery, but worth every minute of anxiety!

After a short stay in hospital I was able to go home (armed with a cocktail of drugs!) and make the most of my new gift of life.  I was able to go back to work, catch up on the social life I had missed with friends and family, complete a skydive for a kidney charity and go on some great holidays.

Sadly, only one year later, I had a bad infection in my new kidney which kept me in hospital for a month undergoing various treatments.  This marked the beginning of the end for my new kidney as it was after this infection that I went on to have numerous episodes of rejection treated with aggressive drugs.  Unfortunately this only kept the kidney happy for short periods of time before the next episode.  It was a scary time as I had to get used to the idea of my kidney failing and the prospect of a second transplant.

As the kidney slowly deteriorated I had to begin dialysis which I found very frightening and tough on my body.  It made me sick, weak and dizzy.  I suffered awful headaches and felt permanently drained.  It was extremely difficult for me as a 24-year-old woman to endure being hooked up to a machine three times a week for four hours at a time, when all I wanted to do was live a “normal” life and be doing all the things friends my age were able to enjoy.  As I gradually become more and more unwell my dad’s kidney had to be removed; more surgery, more risks, and more recovery time was a daunting prospect.  When would I ever get another kidney?

I was lucky enough to have various family members and friends be tested to give me a kidney but unfortunately none were suitable matches.  I began to lose hope and wondered if I was destined for a life on dialysis.  I then found out about the paired scheme which opened a completely new door for me.  One of my friends who had wanted to donate to me but didn’t match was able to enter this scheme with me; hopefully there would be another couple in the same boat as us and we would match each other and swap kidneys!  It sounded a bit far-fetched but I was willing to try anything.

Once both my and my donor’s work up was complete (to check we were both fit for surgery) we were told we would be entered into the next ‘run’.  There are runs every three months where a computer does some special sums and couples are hopefully matched up.  To my surprise and joy, on 16th January 2014 I received a phonecall from my transplant coordinator to say we had a match from our first run.  I felt as though I had won the lottery!

After some final tests were completed the transplant was booked and, just two months later on 27th March 2014, I was lucky enough to receive my new gift of life.  I felt so excited on the day of the transplant wondering who this wonderful person was that was giving me a kidney, together with such gratitude for my friend who was in the paired scheme donating a kidney to a stranger in order for me to receive one.  There was also anxiety; what if this other person changed their mind at the last minute?

All went well and I am now almost three years post-transplant and have since met the wonderful stranger that gave me their kidney.  Not only have I gained a kidney and new life but also a friend for life in Linda.  I have been able to start a new job I enjoy, become a kidney peer supporter at my renal unit, complete a kidney charity walk, be a Maid of Honor and bridesmaid for two friends, see some more of the world and am currently planning my own wedding and a ‘big’ birthday soon!