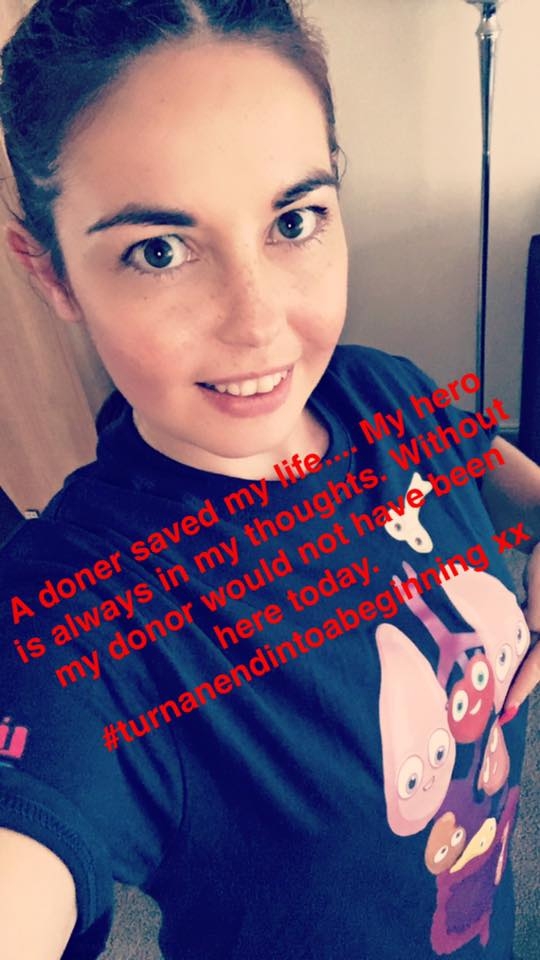 I was asleep for over a week; I would not wake up, which they feared could have been due to brain damage. When I did finally awake I was confused to find myself in ICU with a breathing tube down my throat.

December 2015 – my life changes forever.  The doctors told me I had Auto Immune Hepatitis, which had caused cirrhosis of my liver.  I have always been a happy and outgoing person and this hit me like a ton of bricks.

I first became ill in October 2015.  I knew within myself straight away that something was seriously wrong as I was not my usual self.  I started sleeping all the time as I had no energy, stopped socialising, stopped eating, my stomach was swollen to twice its size and also my feet.  I became withdrawn from everything and everyone.  I think I actually became a little depressed as I was back and forth to the doctors for weeks but they kept giving me constipation medication and not really taking me seriously.  I eventually got bloods done and a referral to a liver specialist.

One Sunday, whilst awaiting an appointment with the specialist, I was very unwell in bed and was now struggling to breathe with the pressure from the fluid build-up. I was then admitted to hospital.

The next day I got my diagnosis but not the full picture as I needed a biopsy to determine the severity of cirrhosis.  I had mixed emotions for a few days, ranging from relief as I knew what was wrong to anger it had taken so long to find out what was wrong with me.  It was a really dark time for me as I couldn’t see any hope.  I became very depressed and isolated myself a little more.  Nothing could prepare me for what happened next.

I had a very gloomy Christmas and birthday (which is on Boxing Day), taking new meds and trying to come to terms with everything.

My biopsy never happened!  On 30th December I woke up vomiting blood.  I was rushed to hospital by ambulance and from there I have no recollection of what happened.  I had two massive gastric bleeds which resulted in many blood transfusions and being put into an induced coma.  I was given two hours to live; one more bleed could have killed me.

I was asleep for over a week; I would not wake up, which they feared could have been due to brain damage.  When I did finally awake I was confused to find myself in ICU with a breathing tube down my throat.

A few days later, whilst in hospital getting assessed for transplant and trying to recover, I had another massive bleed.  Luckily they managed to get it under control quickly.  I was then given scopes every few days until my transplant to control the varices which were causing the bleeding.  I was placed on the transplant list in the top band as I was desperate.  My sister underwent tests to see if it was possible to be a living donor.

I was allowed home shortly after but was in and out of hospital constantly.

At one point I almost gave up as I was exhausted and in so much pain.  I told my family that if anything else happened they should let me go; I couldn’t take any more.  Luckily my family made me pull myself together.

Five weeks after being placed on the list I got my life changing phonecall – a donor had been found.  I remember it being an extremely emotional day.

Since February my whole outlook on life has changed for the better.  I learned what and who was truly important to me.  I am not the same person I was before I became ill; I am a better person because each day I am more thankful than the last and it has given me a new lease of life.

My hero has shaped me into the person I am today and I am truly blessed because of this.  They have changed my life and given me a new chance.  I am now planning my future.  I have just come back from my holiday in Cyprus and have a few more exciting trips planned in the near future.  I am also moving in with my partner this year and looking forward to making more memories with my amazing family and friends who truly stuck by my side when I needed them most.  What I thought was my end has been changed into my new beginning and second chance at life.  I intend to hold on to it for as long as I possibly can.