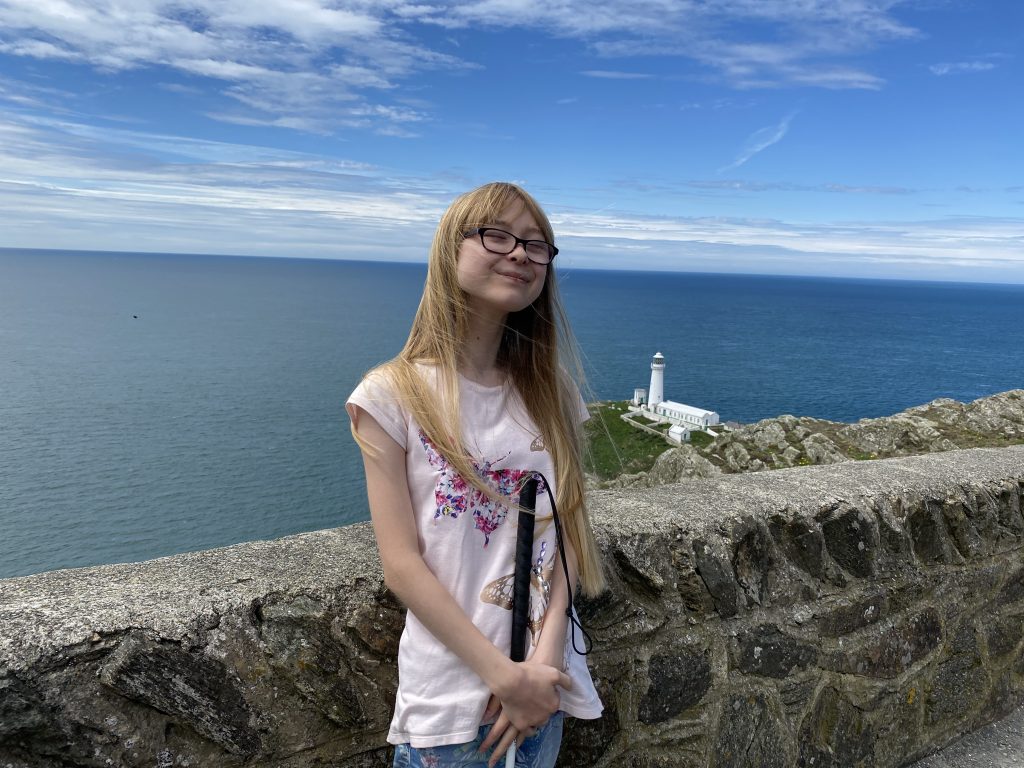 Angharad Rhodes is likely our most famous LLGL advocate. As the star of the popular BBC children’s show Melody, Angharad is often recognised when she is out and about. What makes Angharad extra special is that she has achieved so much despite being severely sight impaired.

Angharad Rhodes is likely our most famous LLGL advocate. As the star of the popular BBC children’s show Melody, Angharad is often recognised when she is out and about. What makes Angharad extra special is that she has achieved so much despite being severely sight impaired.

When Angharad was 2 weeks old she was diagnosed with cataracts and other eye conditions including Peter’s Anomaly, (this affects the way the eyes have developed including the surface of the eyes with the cornea and pupil being stuck together and any vision being blurred) and Microphthalmia, (small under-developed eyes – Angharad’s eyes and eye sockets stopped growing before she was born), Glaucoma (high pressure in the eyes), and Nystagmus (an uncontrolled to and fro movement of Angharad’s eyes which also reduces the vision that she has) which has now lead to her being registered severely sight impaired (registered blind).

Angharad’s sight would have continued to deteriorate until she would not longer have any light perception whatsoever. In 2016 she had a cornea transplant which allowed the pressure in her eye to be reduced, saving her light perception.

Anghard’s mother, Lynda, shared that: “As a family we are so thankful that someone chose to donate their corneas. Without them, Angharad’s world would have been plunged into darkness. They gave our daughter the gift of light and for that words cannot express how thankful we are.”

When she’s not being a TV star, Angharad enjoys creating content for her YouTube channel Angharad’s Life. The content of her videos varies, but a dominant theme is her vegan lifestyle. She shares videos of her creating vegan meals with her mother and reviewing vegan foods.

Angharad has been an enthusiastic advocate for Live Life Give Life, encouraging people to have the conversation about organ donation so that their families know their wishes.

Angharad’s mother commented:  “Many people are very squeamish when talking about eyes. With that, the topic of cornea donation makes people uncomfortable, however we need to get past this. It’s such a shame that this is putting people off donating. I know some are squeamish, but cornea donation is about giving the gift of sight. I hope Angharad’s story shows people how important cornea donation is, almost anyone can donate their corneas. Currently there are not enough donated to meet demand in the UK.”