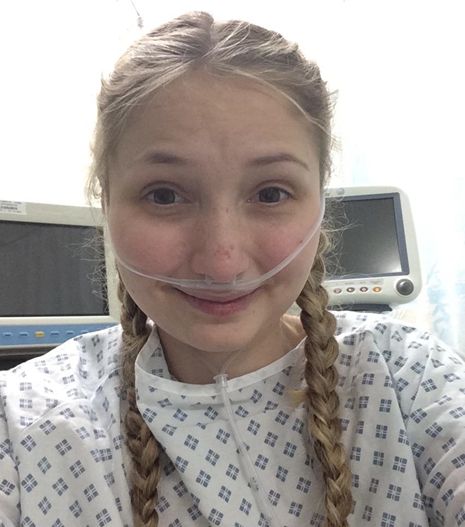 I was born with, and at 6 weeks old, diagnosed with ,the genetic condition cystic fibrosis. Cystic fibrosis causes the lungs and digestive system to become clogged with thick, sticky mucus meaning that food isn’t digested effectively and the lungs are prone to infections that over time cause irreparable damage.

Our advocate Holly received a double lung transplant almost 6 years ago in 2015 and her story has a happy ending. This is her story told in her own words.

I was born with, and at 6 weeks old, diagnosed with ,the genetic condition cystic fibrosis. Cystic fibrosis causes the lungs and digestive system to become clogged with thick, sticky mucus meaning that food isn’t digested effectively and the lungs are prone to infections that over time cause irreparable damage.

I was lucky to have a relatively normal and healthy childhood, thanks to the care and dedication of my parents. I would have 2 monthly hospital check ups and had a daily regime of tablets, physiotherapy and nebuliser medications. I only had 2 hospital admissions as a child, aged 5 and 11 for intravenous antibiotics. Unfortunately aged 14 I developed a nasty infection in my lungs which required intense regular intravenous antibiotic treatment. I began a regime of 2 weeks of IVs every 3 months to try and irradiate the infection, this iv routine became my new ‘normal’.

At 18 I suffered from a collapsed right lung and was hospitalised for over 4 weeks requiring a chest drain attached to a suction unit to allow my lung to heal and re-inflate. Upon discharge from hospital I moved into university halls to begin studying textile design. University life wasn’t easy, I did manage to have great fun but trying to balance my health with uni work, a social life as well as cooking and cleaning for myself was difficult and my health declined. As a result I made the tough decision to leave university after a year and move back home where I had the help and support of my parents.

I was diagnosed with another lung infection common in people with cystic fibrosis called pseudomonas. This again required lots of intravenous antibiotics. However, determined to still have purpose and meaning and not let CF take over my life, I began a part time apprenticeship in hairdressing where I was able to better balance my health alongside my work thanks to the help of my parents. I managed to qualify as a hairdresser but not long after once again had to put my career on hold as unfortunately the pseudomonas infection was resistant to many antibiotics and it ravaged my lungs. By 21 I was end stage CF and without a transplant had less than 2 years to live.

I was scared of transplantation and wasn’t sure it was the right path for me. But after losing my closest friend with CF, Emma, due to an unexpectedly bad infection, the brutal reality that I could be next hit me. That terrified me more than a transplant did. I wasn’t ready to die so instead I decided I needed to try my best to stay alive which meant being assessed for a double lung transplant. After a year of assessments due to the complex microbiology in my lungs, I was finally placed on the waiting list in September 2014, aged 22. I had 2 false alarms for transplant before it was 3rd time lucky and I got my gift of life in February 2015. I had a long and difficult recovery, there were a few times the doctors didn’t think I would pull through, but thanks to their medical expertise, the wonders of science and of course my donor, I survived.

The last 5 years and 8 months of extra life have been incredible, reaching my late twenties is something I never thought would happen, growing older is such a privilege. I’ve been given extra time with my loved ones to make memories which is the most important thing for me. I’ve had some amazing holidays all over the world and ticked off many other bucket list adventures! I work part time as a designer in the textiles and fashion industry alongside a variety of voluntary work – I love helping others. I have been able to see my goddaughter more than double in age from 5 to 11 which fills me with such joy! I’ve watched as many beautiful sunsets as I can and enjoyed many more cups of tea and yummy foods with family and friends.

There has been so much extra love and laughter for me to soak up. I feel so lucky and will forever be grateful to my donor, medical teams and the ongoing support from my family and friends for this life ❤️